A Year Later (Another Post About My Hair…Plus Some Other Stuff) December 2, 2018

Today marks the anniversary of the day I underwent the big chop, that is, when I had my hair cut short before starting chemotherapy for breast cancer. A few weeks from now, it will have been a year since my hair started falling out and I shaved the rest of it off. It’s been a long, difficult year, and there were times when I thought it would never end. Five months of chemo felt more like five years. There were days when I was so fatigued that simply sitting upright was a struggle. For a while, I had blisters on my hands and feet, which made it painful to walk or do pretty much anything with my hands. I had frequent nose bleeds. My sense of taste was dulled, but not enough for me to shake the weird chlorine-like flavor that took up residence in my mouth. For 12 of my chemo sessions, I endured the considerable discomfort of having ice packs on my hands and feet in an effort to prevent neuropathy. Despite that, I lost some sensation in my fingers (most of which has returned, although I still have some lingering effects). Since finishing chemo, I’ve had surgery and radiation therapy, and I’ve begun what’s likely to be 5 to 10 years of anti-hormone therapy.

On the bright side, during all of this, I was on the receiving end of an outpouring of love and support from family members and friends. My husband took me to and sat with me during every chemo session without complaint. While I could not drink because of chemo, he concocted special mocktails for me. He took up the slack when I just couldn’t do some of my usual household chores. He was patient, loving, and dependable. Other family members and friends reached out in so many ways to let me know they were thinking of me. They visited. They sent flowers, cards, and gifts. They brought over frozen meals and offered to help in any way they could. So, even though the last year has been no picnic, I do realize I’m very lucky in so many ways. I’m on the other side of the hardest part of treatment now. I responded well, and odds are good that I’ll be just fine in the long run. And I’m incredibly grateful to everyone who helped me through it.

But I’m still pissed about my hair.

If I had to choose a single thing about what I’ve been through during the past year that has had the biggest effect on me, it would be losing my hair. Sometimes that seems absurd. It’s just hair. It grows back. It is growing back (although not nearly fast enough for my taste). It’s also something that’s been practically impossible for me to ignore. From having it cut short to having it fall out, from shaving it off and muddling through the hassles and rather large learning curve involved in dealing with a wig to coping with the awkward phases of hair regrowth–my hair has been on my mind every single day. I’ve tried to make the most of it. I have worn (and continue to wear) lots of fun hats. I’ve dyed my hair a variety of fun colors as it’s been growing back. I’ve smiled and thanked people who’ve told me I look good with short hair. I’ve acknowledged milestones like first post-chemo haircut and first use of a hair dryer.

I’ve tried to remind myself how incredibly lucky I am, but on this one particular front, it’s been really hard.

At times, I wonder what it says about me that, a year later, I still haven’t adjusted particularly well to this change. I fear that my sustained reaction to the situation has wandered into petulant child territory. I’ve had recurrent dreams that my hair has somehow returned to its former length overnight, and I wake up from those dreams crestfallen. I’ve cried about my hair on multiple occasions. I look at old pictures, and I’m insanely jealous of myself. Did Past Liz with her long, wavy red locks have any idea how good she had it? I don’t think so. I sometimes look in the mirror, half expecting to see Past Liz instead of my current reflection, and then I’m surprised and disappointed when I don’t. It’s not even that I think my current reflection is bad. It’s just that it doesn’t look like me. In many ways, my life has gotten back to normal, but I still don’t feel like me.

I know I’m more than my hair, but that doesn’t mean I won’t miss my long locks every single day until I have them back. I just want to feel like myself again. 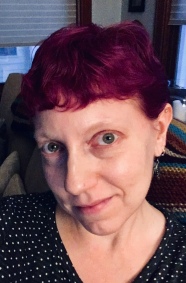 The waiting is the hardest part.