Eclipster Trek to Totality (or ‘There and Back Again…Eventually’) August 22, 2017

I don’t recall exactly when my husband Ian first mentioned the 2017 solar eclipse to me, but it was at least 2 years ago. I had been in Peoria in 1994 and had seen the annular solar eclipse, which was pretty cool. Weather permitting, a total eclipse would be much more impressive, so I said was down for a road trip to be in a good viewing spot for that. In the following 700+ days, we revisited the topic occasionally, then with increasing frequency as E-day drew nearer. Vague ideas gradually gelled into firmer intentions, and we eventually had a plan for a fun road trip and great geekery with some good friends.

In early July our plans to travel downstate for the event came up in casual conversation more and more often. I sometimes forget that not everyone is married to someone with an astronomy degree and had not been hearing about the eclipse for years, so I was a little surprised by how many people were unaware there was an eclipse in our near future. By late July/early August, though, people had started to catch on. With each day, I saw more news items and Facebook posts that mentioned the eclipse. I admit I may have rolled my eyes a little at people who were just starting to get hip it. After all, I was an eclipster–I had been into this long before most people.

With just days to go, I began to hear stories of people scrambling to obtain and/or pay exorbitant prices for proper eye-wear and started to think that maybe we should have gotten more than 6 pairs of glasses and made some sweet bank by price gouging. Meanwhile, Ian did the final test runs with our new camera and solar filter. I procured road-trip snacks and chose a knitting project to work on for at least part of our time in the car. Texts began to fly about what we were going to do about watching Game of Thrones on Sunday. That question had not occurred to me as I haven’t watched the show or read the books, but appropriate plans were arranged.

On Sunday evening, Ian and I (along with fellow eclipsters Rachel and Matthew) drove from Chicago to Peoria, the home of the remainder of our crew (Michelle and Friday). That evening’s Game of Thrones episode was waiting on their DVR. As it aired, I occupied myself with other things but did have my attention drawn to the show by flaming undead bears and an epic javelin throw. I also recall a fair bit of shouting at the television. I know close to nothing about Jon Snow, but apparently he doesn’t plan very well.

We set off bright (well, actually somewhat dim) and early Monday morning. Our intended destination was Goreville, IL, but we knew that traffic would be heavy and  unpredictable and were content to stop anywhere within the path of totality. For much of the way, we avoided the interstate in favor of state roads, where traffic was certainly heavier than usual but not too bad. We passed the time with activities like a Bohemian Rhapsody sing-along and Six-Degrees of Kevin Bacon, Serial Killer Edition*.

During a pit stop in Vandalia, we perused the souvenirs available at a gas station. In addition to the variety of mainly gun/hunting-themed signs, stickers, and mugs, they offered US-state shaped magnets for every state (well, there were slots for all of them, but several non-IL magnets were sold out, which brings many questions to my mind). Little known fact–Canada is actually a US state (at least according to this display); we had great fun pointing this out to Matthew, who originally hails from the Great White North. We also discovered coffee nut M&Ms (thumbs up) and got some breath-freshening, on-theme Eclipse gum before getting back on the road. 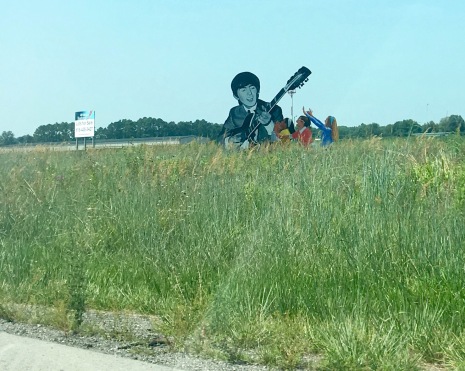 We got on I-57 a bit south of Vandalia, and traffic flowed pretty smoothly for a little while but then slowed dramatically, and before long, it became clear that we were unlikely to make it to Goreville in time. Rather than risk being trapped on the interstate between exits, we got off I-57 in Benton. At that point, we were already within the path of totality but went a little further south, eventually stopping at a park in Johnston City roughly an hour before totality. Ian got the camera set up with time to spare before the eclipse began.

There were a few other small groups of people in the park, and a few more arrived shortly after we did. We laughed and took pictures of each other wearing funny-looking glasses and looked skyward through protective filters as the moon started to gradually edge its way in front of the sun. We hydrated, snacked, and took refuge from the heat in the shade of trees. Someone in the park played the obligatory Bonnie Tyler song. Rachel made PAC-MAN noises. We made pinhole “cameras” with our thumbs and forefingers and looked at the resulting tiny crescents cast upon the ground. We texted with friends and family members both inside and outside the path of totality. The light around us started to dim, resembling that of an overcast day, but with mostly clear skies. An exciting eeriness descended on us, and I began to understand why, before anyone figured out what was really happening astronomically speaking, our ancient ancestors were more than a little freaked out by total eclipses. 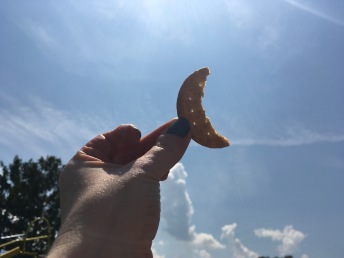 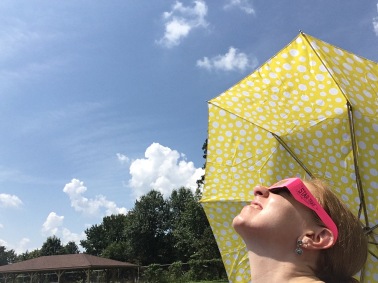 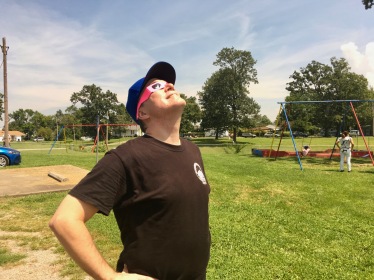 Then came totality. I can show you pictures of the sun’s corona and the sky otherwise looking like sunset in every direction. I can try to describe the experience with metaphor and say that there was electricity in the air as everyone in the park marveled and gasped, alternating between excited chattering and speechlessness, as we all drank in those two-ish odd minutes. But I know I really can’t do it justice. I’ve had a few experiences in my life that have made me understand what the word breathtaking truly means–this was one of them.

With totality behind us, we hung out in the park for a while longer, still buzzing about what we had just witnessed and watching as the moon slid out of the sun’s way. When it was all over, we packed up and headed for the nearby Dairy Queen where we enjoyed frozen treats and got our first looks at some of the pictures after they’d been transferred to an iPad. We started to kick around ideas for the 2024 eclipse, which included some talk of a ukulele band (Total Ukeclipse?), as well as customized t-shirts and/or hoodies.

Around 3:30 pm, we started toward home, Michelle and Friday heading back to Peoria, and the rest of us toward Chicago. Traffic was slow, even on state highways. Google Maps projected a travel time of just under six hours, which we took with a grain of salt. Additional grains of salt were added as traffic continued to crawl. After we’d been on the road for two, three, and then four hours, Google Maps continued to predict that we’d arrive home in around five hours. We remained cheerful, reminding ourselves of what an incredible experience we’d just had. Plus, we got to see some cool lightning and a rainbow on the way home.

So much neat stuff in the sky in one day!

I recall it was still somewhat light out when Matthew, who planned to work on Tuesday, started to joke that we might need to drop him off at work on the way home, as he might not have time to actually go home first. There was the small problem that he was wearing shorts and needed pants to go to work, but several potential solutions were offered: 1) we could stop at a 24-hour pants emporium; 2) I could knit him some pants, which, with the yarn selection I had on hand, would be technicolor dream pants; 3) he could barter for pants at a rest stop.

Around 9:30, Michelle texted to say she and Friday had finally made it home. At the time, we were at a rest stop north of Effingham (as was roughly 2/3 of the state’s population by the looks of it), still more than 250 miles from home. Rachel urged Matthew to consider not going in to work on Tuesday if we got home after midnight.

It was my turn to drive, and for about two hours, we made slow but decent progress. For some stretches, I actually drove at or near the speed limit. Then, around Rantoul, traffic came to a dead stop. We were stuck with nowhere to turn around and no exit for seven miles. Every few minutes, we inched forward a little. Signs told us the left lane was closed 4.5 miles ahead. Reports indicated that this lane closure was supposed to have been suspended in the days surrounding the eclipse, but apparently that had not happened, and there had been no signage in advance to divert traffic to an alternate route on a state highway. However, short time later, when blinding sheets of rain began to roll through the area, I was actually grateful not to be driving more than a few miles per hour.

About two hours later, we finally reached the next exit, stopped to switch drivers, and continued on Highway 45. Some time around 3:30 am, I remarked that Rachel’s previous comment about possibly getting home after midnight seemed like a quaint, distant memory. We finally made it to our house just after 4:30 am, approximately 13 hours after we’d departed. Rachel and Matthew left for their apartment, Matthew having long ago abandoned plans to go to work (with or without pants). As Ian and I collapsed into bed, we mumbled about plans to sic undead flaming bears on the Illinois Department of Transportation.

All that said, it was totally worth it.