A while ago, I got a text from my friend Rachel asking if I wanted to do something crazy with her. My initial thought was Yes! but I figured it might be best  to ask for a few more details before responding in the affirmative, lest I unwittingly commit to wrestling alligators in banana pudding while wearing hot pink lederhosen–not that was a likely scenario, but still…

Turned out, the aforementioned something crazy was a trip to Greece. Yes! I wanted to do that!

This would be my first experience with what is known in the lingo of the airline industry as nonrev travel (short for nonrevenue travel), using a buddy pass, and traveling on standby. Rachel, who had been nonrevving for a while, assured me she would try to make it as painless for me as possible. So, one Saturday afternoon a few weeks later, we sat down on my couch to work out the details regarding flight and lodging options while our husbands sat in the kitchen drinking beer and discussing viable substitutes for quince jam in mixology.

Rachel started to seem nervous as she looked at flight loads and option, which, in turn made me more than a little on edge. Anyone who knows me knows that I love to travel, and by love to travel, I mean that I like to be in a lot of different places. The actual travel (as in the getting from here to there) part, I’d just as soon do without. In fact, if teleportation were safe and economical, I’d be all over it (so, if someone out there could get on that, I’d really appreciate it). Anyhow, it happened that Rachel and I had discussed going to Barcelona a while back, but that had never come to pass, so we considered it again. Both the number of available options and the flight loads looked better for Barcelona than for Athens. Barcelona offered two other bonuses: a Ferris wheel and an opportunity to use the Spanish I took in high school. So, after little debate, we decided. Barcelona it was! We celebrated with buttermilk margaritas* sans quince jam.

About a week before our departure date, Rachel let me know that our first-choice flight, although not oversold, had few seats left and that we might need to come up with a backup plan. I had known this might happen and that flying standby meant that we might get to Barcelona in a roundabout, seemingly nonsensical, way, later than we’d planned. 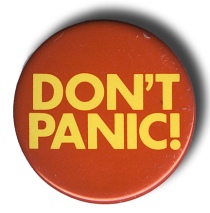 Don’t Panic! – the Pin by Phil Wolff is licensed under CC BY-SA 2.0

In the next text, Rachel asked if I’d ever been to Brussels. Again, I figured this might be part of a hypothetical weird hop to get to Spain. It was suboptimal, but no big deal. I congratulated myself for non panicking.

Several hours later, I got a text saying that flights to Santiago were wide open. 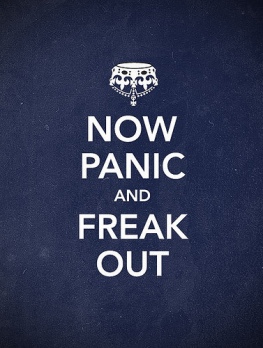 Now Panic and Freak Out! by emilydickinsonridesabmx is licensed under CC BY 2.0

I really didn’t want to be a pain or look a budy-pass gift horse in the mouth, but my anxiety was starting to mount. Erm, should I be nervous? I texted back. Nervous? Nah, ready for adventure! Besides, Chile is a Spanish-speaking country with vineyards, so it’s practically the same thing as Barcelona…except that I’d spent weeks mulling over my packing plan for taking only a carry-on bag and the fact that it was winter in Chile would throw a big old wrench in all of that.

But hurrah! Flight loads to Madrid didn’t look bad, so we decide that would be our backup plan, and, if needed, we’d get from Madrid to Barcelona via train or other means.

When departure day finally arrived, Rachel and I met at the airport bright an early and  got onto a flight Atlanta without an problem, but really, that was the easy part. We waited in the Atlanta airport, watching as we moved down, down, up, and then down again on the list of standby passengers for Barcelona while also keeping an eye on the list for Madrid. For a time, things looked somewhat grim, and we found ourselves in front of the Departures monitors, looking to see where else Delta flies that might constitute an option for eventually getting ourselves to Barcelona. Paris didn’t look good, nor did London, Amsterdam, Rome, or Milan. Dublin looked like a possibility, but getting from there to Barcelona presented another set of difficulties that I won’t even go into here.

I was anxious, for sure, but I was not hyperventilating, nor was I doubled over with stress-induced stomach pains, so I was actually pretty impressed with myself for being pretty chill (for me). I told myself that however and whenever we got there, it would be an adventure and kept my fingers crossed that our current positions on the Barcelona standby list would hold. In the end, they did. We didn’t get seats together, and we were in the last and second-to-last rows of coach, but we got on that plane before its wheels went up and it it headed toward Barcelona! ¡Olé!

* Earlier that week, as a joke, I’d suggested we look up cocktails that contain buttermilk so we could use the buttermilk that was remaining after my last batch of waffles. Ian took this as a personal challenge and found this recipe. I was not expecting to like it at all, but it was surprisingly decent.