On the morning of our third day in Ireland, we bid farewell to Ballyvaughn, but not before stopping at a service station to fuel up. Well, what I should really say is that we stopped at there nd puzzled for longer than we’d like to admit about how to open the fuel tank on the rental car. We searched diligently for a switch, exploring every inch of the dashboard, the glove compartment, the center console, and the driver’s side door. I would have gladly read the freakin’ manual to solve the mystery, but we couldn’t find that either. So, there we were, seven degrees among the four of us, and we couldn’t open the damn tank to put fuel in the car. We were just going to have to live in Ballyvaughn forever! Thankfully, one of the service station employees came to our rescue and showed us what to do. It’s very complicated, you know…you just open the door. There’s no lock. None of us had even thought to try that. After all, we’re from America where we fervently protect our highly subsidized gas!

With that out of the way, we set off to Dunguaire Castle, near which we narrowly avoided an all-too-close encounter with a tourist who either had a death wish or was completely oblivious to the fact that 1) Irish roads are narrow, 2) there are scores of other tourists around who are driving cars they’re not used to, very possibly on a side of the road they’re not use to, and 3) THIS WOULD BE A GOOD TIME TO PAY ATTENTION TO WHERE YOU WALK. I don’t think he even realized how close we came to hitting him. We were half tempted to go back and just tap him with the car so he would at least learn a lesson, but then we remembered that we were the four people who couldn’t figure out how to open a fuel tank, so perhaps we should dial back a bit on the judginess. 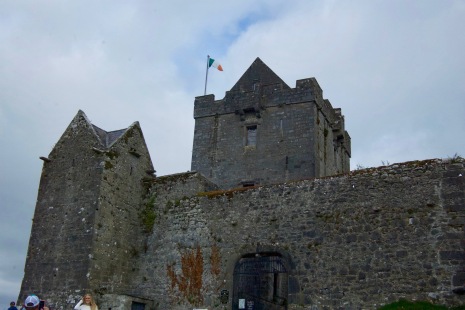 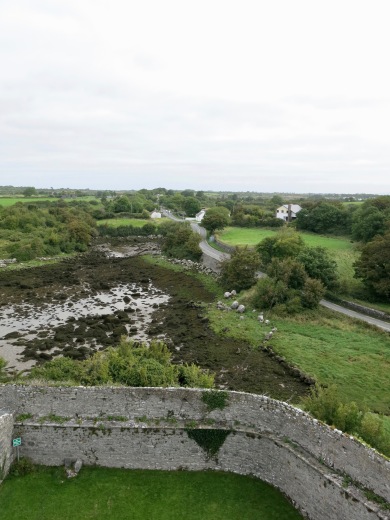 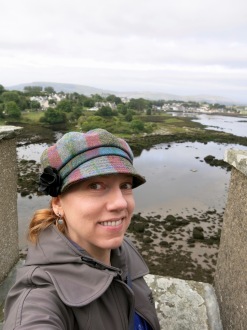 From Dunguaire Castle, we headed toward Dingle, a town whose name always causes my internal 12-year-old to giggle. We got stuck in a traffic jam in Adare, but that allowed me to get this picture, so not all was lost.

Gas stations here are very sullen because stupid tourists can’t figure out how to work their rental cars.

Otherwise, the drive was scenic and pleasant…except for the stretch when we were stuck behind an old truck that was wobbling so much, I was a little afraid it was going to break into pieces at any moment. Anyway, Ian was practically becoming an expert at driving on the challenging Irish roads.

Upon arriving in Dingle (teeheehee), we ate lunch at Murphy’s Pub, during which time Ian and Friday almost came to blows while debating the merits of roundabouts. This seemed to be a clue that it was time for everyone to chill out for a while, so we took a relaxing stroll around Dingle (giggle). We had noticed that ice cream cones are to the Irish what bottles of water are to Americans. No matter whether they were driving trucks, riding bikes, or conducting symphonies (okay, we might not have actually seen that last one), most Irish people about town seemed to have ice cream cones. That was reason enough to pop into Murphy’s Ice Cream (which makes me wonder how many different establishments named Murphy’s could one patronize in a single day). I sampled some gin ice cream, which was good but not what I was in the mood for. I opted for Irish coffee and sea salt.

A cousin of Crookshanks, perhaps?

We had learned our lesson on previous days, so we stopped at the grocery store in Dingle (snicker) for fortifications before driving to our next home away from home in Killorglin. Once there, we relaxed with a beer and then headed out for dinner…and more beer. It was not a long walk to the main part of town, but it was more treacherous than one might guess. By that time it was dark, and we had to walk a few hundred feet without sidewalk. Then Michelle was viciously attacked by stinging nettles and Friday decided to eat some random berries from bushes by the roadside. Apparently, they were not poisonous because he survived.

At Bunkers Bar, we had dinner and drinks and settled in to listen to some real live Irish music at a real live Irish pub. The guitarist twiddled around for a short time and then went away for 45 minutes, during which we entertained ourselves by discussing fascinators, trying brown sauce (thumbs down), and tossing out bits of wisdom like, “When you’re naked, you don’t have pockets.” When he returned, we couldn’t help but laugh because our first experience with real live Irish music in a real live Irish pub was…City of New Orleans. Good morning, America, and good night, Ireland!