After being delayed for 24 hours, Rachel, the final member of our Paris party, arrived safe and sound. Before you feel too bad for her about getting delayed so long, let me tell you that she is a flight attendant and gets to fly practically free. Of course, she’s a flight attendant, and as part of her job, she has to deal with a public that tends to get cranky and lose all rationality when traveling by air, so actually, maybe you should feel a little bad for her.

By this point in the trip, I had realized that, aside from periodically turning everything pink, my camera was also going through batteries like my companions and I were going through wine, so I ran out to get more batteries before we set off on our adventures for the day. I went to a pharmacy first and had no luck there, so I went to the grocery store. I wandered the aisles for a while, thinking there was no way the store could not have batteries. I did find cough drops, which I had been unable to find the previous day but were suddenly quite obvious. Alas, I could not find batteries and I decided that I must inquire as to their location. I did not know the word for batteries, but I had my camera with me. I dumped the dead batteries into my hand and approached the nearest store employee. “Vous voulez…” I said and held out my hand to show him the batteries. He looked at me quizzically and then led me to the batteries.

I felt pretty proud that my Earworms podcasts were coming in handy, and I was successfully communicating with the French, even if I didn’t know the word for batteries. Then I realized that I had actually meant to say “Avez vous” instead of “Vous voulez.” Instead of asking the store employee if they had batteries, I had said, in essence, “Would you like batteries?” Suddenly the odd look he had given me made sense.

Ah well, the important thing is that I had tried and I had accomplished my goal of purchasing batteries.

We headed out to Sacre Coeur, a basilica that is located at the highest point in the city of Paris. The view was lovely, and the basilica was very pretty. Unfortunately, the taking of pictures inside the basilica was not allowed. If nothing else, I would have loved to get a photo of the souvenir coin vending machine with a giant backlit portrait of Jesus on it. It was incredibly classy and tasteful. 😉 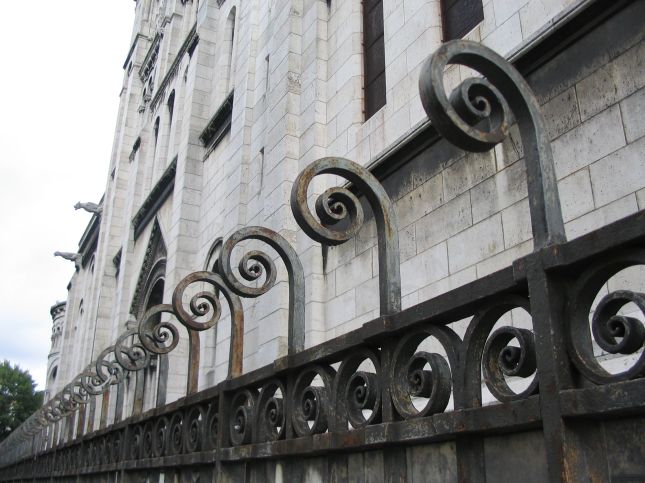 When we finished in the basilica, we browsed around the nearby shops, where I purchased my first hat of the trip (a periwinkle beret). Then we stopped for a lovely three-course lunch (plus wine). When that wasn’t quite enough, we followed it with ice cream a bit later on. With all the steps we had climbed so far, we felt we’d earned it.

We headed toward home, but not before stopping at the grocery store, once again for some food and wine reinforcements. I will preface my next tale by saying that I am not usually the kind of woman who gets hit on in grocery stores. That might be because I hate grocery shopping, so I avoid it when I can, and when I can’t avoid it, I probably have a sour look on my face. Ah, but grocery shopping in France is different. I still would have been happier if food and beverages magically appeared in the kitchen, but one can’t get too grumpy shopping for cheese and wine while on vacation in Paris!

Anyhow, as I stared blankly at the shelves of wine waiting for a bottle to jump out and say, “Pick me!” (figuratively, of course), a man approached me and asked if I needed help choosing a wine. I’m not overly familiar with French wines and was planning to pick something at random within a low price range, so I figured I had nothing to lose by getting some help from a local. He was very nice, asking what qualities I liked in a wine and explaining what some of the labeling meant. After we’d chatted for 5 minutes or so, he made a recommendation and seemed somewhat disappointed when I simply thanked him and returned to my shopping companions. In hindsight, I think that I should have at least asked him if he would like some batteries. 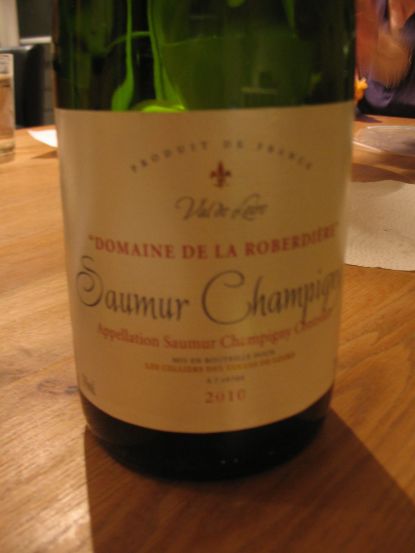 Wine recommended by my Paris “boyfriend.” It was pretty good.

We went back to the apartment for a while to recharge and wait for nightfall, when we headed out again for a boat tour along the Seine. It was chilly but really beautiful! I had not known that the Eiffel Tower actually sparkles for some time each night. It’s is a sight to behold. 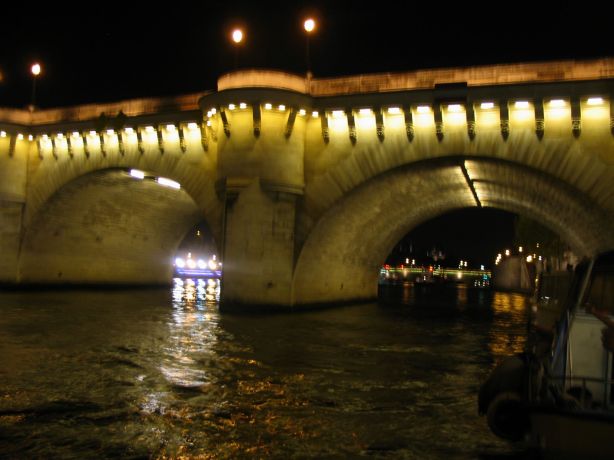 This is a bridge–I want to say the Pont Neuf Bridge, but I’m not entirely sure.

My new beret kept me warm on the boat!

When the boat tour was over, we went back to the apartment for some Champagne to toast Rachel’s first day with us, followed by some wine, some more wine, and a bit more wine. Actually, I stopped drinking once the Champagne was gone, but bottles of wine were being opened at 2:00 am, and my companions drank me under the table. I had a cold. That’s my story, and I’m sticking to it.

3 Responses to “Francypants Part 3 – Me Talk Pretty One Day (or Would You Like Batteries?)”