I had my fair share of toys when I was a kid, but I didn’t take them with me wherever I went. Also, in those days, portable electronic devices were nowhere near as ubiquitous as they are today, and there were times, particularly on long car trips, when I would have to keep myself entertained. I didn’t mind so much. I was pretty good at it. I could turn almost anything into a toy, including the tools that my dad often kept in the back of the car.

There were two in particular I remember playing with quite often. I turned them into superheroes: Super Wrench and Rexo Wrench! Looking back Super Wrench seems like a perfectly sensible name for a tool superhero (well, the super part anyway, I’ll get the to the wrench misnomer in a bit). Rexo Wrench, on the other hand…hmmm, well, I was an odd kid. 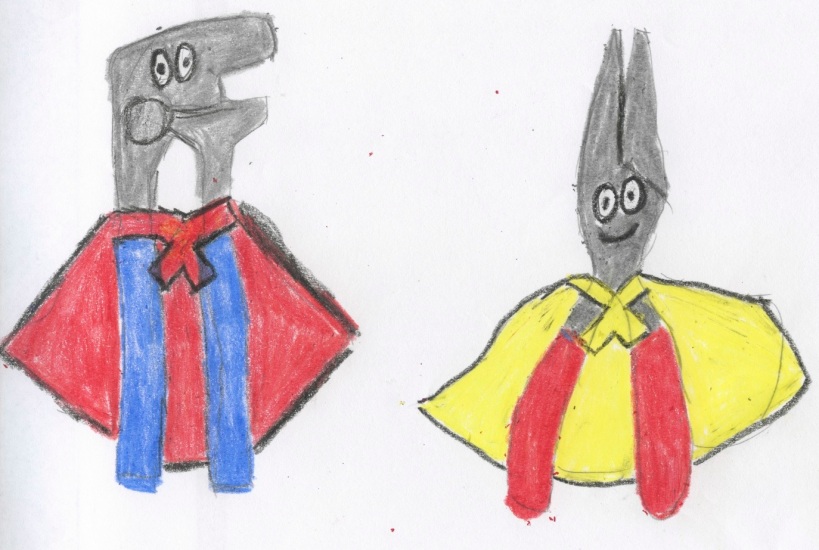 Super Wrench and Rexo Wrench to the rescue!

Super Wrench and Rexo Wrench would save the innocent screwdrivers of Tooltown from the evil Hammerman or the wily Tapemeasure. Great fun.

Some time later in my childhood, I learned that Rexo Wrench had been inappropriately named. He was, in fact, not a wrench but a pair of pliers. No bother. He will always be Rexo Wrench to me!

Much, much later, to my shock and dismay, I discovered that Super Wrench was yet another victim of my lack of tool knowledge. I had received new license plates and replaced my old ones with the new ones. As the nuts and bolts were slightly rusted and full of crud, the job required tools. I tend to pat myself on the back and brag about anything that resembles manual labor, and later told my husband of my tooly prowess.

“What did you use to get them off?” he asked.

“Really? I didn’t think I had a wrench that would be the right size for that.”

“Oh, I used the adjustable one.”

“I don’t have an adjustable wrench.”

“I really don’t,” he insisted.

I walked to his toolbox and retrieved the tool I had used to complete my task. “Yes you do! See! Adjustable wrench!”

“That’s not a wrench,” he said with smirk.

“What do you mean it’s not a wrench?”

I was pretty sure he was just messing with me. “Fine. If it’s not a wrench, then what is it?”

“It’s a vise grip.” He looked totally serious. Could it be he was telling the truth?

My heart sank. “But…it’s so wrenchy.”

Super Vise Grip just doesn’t have the same ring to it.

3 Responses to “A Couple of Real Tools”