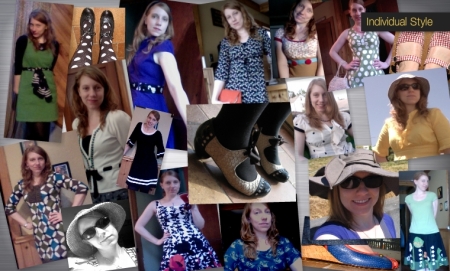 On Christmas eve, I had a conversation with my family about clothing and fashion. My father has never been one to see clothing from anything but a  utilitarian perspective (although, come to think of it, I have heard him say things like “You look nice in that ____ [dress, skirt, etc],” so the fact that clothes can be aesthetically pleasing is certainly not beyond his comprehension). If it were up to him, we’d all be donning something akin to denim prison uniforms (maybe something lighter in the summer) and wearing them until they were beyond repair, at which time they would be replaced by a new but otherwise identical uniform. That’s when I dubbed him a fashion fascist. I tried to make the point that clothing can be seen as a form of wearable art, but he dismissed that idea as pure silliness. The room was noisy, and the conversations drifted in different directions, so I didn’t get a chance to fully support my argument, but I’m here to do so now!

I’m not saying that fashion can’t be taken too far. In fact, fashion, in the sense of following trends, is not really what I’m talking about here. I’m talking about personal style and getting enjoyment from your clothing. I can respect my dad’s disinterest in clothing beyond the most basic of wardrobes, but what I don’t understand is his, in my opinion, misplaced vitriol for style.

Clothing, of course, serves the purpose of providing warmth and protection. It also keeps us from getting arrested for public indecency. I suppose you can argue that the latter should not be the case, but that’s a whole other discussion. Anyhow, I think we can generally agree that clothing, no matter what it looks like, provides useful functions.

On the other hand, there are things like art, music, and literature, which apparently exist solely for our enjoyment. Arguably, we can sustain psychological benefits from these art forms as well, but those certainly go beyond one’s most basic physiological and safety needs. Yet, I don’t think I’ve ever met anyone who doesn’t enjoy some art, music, or literature, if not all three. I’m certainly not going to argue that these things should not exist. How dreary life would be without them! I’m merely saying that they exist mainly as a creative outlet for the artists and for the enjoyment of others, and there’s nothing at all wrong with that.

Other things, such as food and drink, are multipurpose, in that they provide nourishment as well as (if we are lucky) enjoyment. In theory, we could keep ourselves healthy and nourished by eating a well-balanced meal of the exact same items every day, but that doesn’t seem like a very attractive prospect, does it? Yes, it’s true that we can overindulge and perhaps enjoy food and drink a bit too much, but the idea of eating the same or even different but very bland foods for the rest of my days seems like a rather bleak existence to me. I need to eat anyway, so why not enjoy my food if I can?

This brings me back to clothing. As I previously stated, clothing protects me (from wind, rain, UV rays, cold, etc). Uniforms have their place, but let’s face it, uniforms usually evoke one of two emotions from the wearer: pride or dread. Pride is often associated with uniforms of the military or of other professions that set one apart from the rest of the population. On the other hand, school uniforms often evoke dread and hatred, particularly in teenagers who are at the age when experimenting with different looks can be a major source of self expression and “finding oneself.” School uniforms can help prevent some problems (eg, teasing or bullying on the basis of one’s clothing, distractions caused by outlandish or revealing clothes), but I have hardly met a soul who wore a school uniform and didn’t groan at the mere mention of it. If the uniform itself was not ugly or uncomfortable, wearing it 5 days a week became an awful bore. I don’t have many good things to say about the Catholic school I attended for 6 years, but I will say that, in addition to giving me many things to write about in my adult life, at least there were no uniforms!

Sure, I could wear a denim jumpsuit or some other plain, monochromatic uniform every day of my life and suffer no insurmountable ill effects. We all could. But if I’m going to wear clothing anyway, why not have a little fun with it? Why not use it as another creative outlet and source of self expression? I have fun putting together outfits. I look forward to wearing some of my favorite pieces of clothing the way one might look forward to eating their favorite meal. If I’m feeling a bit down, a cute outfit can boost my mood.

I will note that I sometimes get bored with clothes after a certain period of time, and I sometimes get rid of them, even if they still fit and are otherwise functional, but I don’t just trash them. One woman’s trash is another woman’s treasure, so unless they are truly falling apart (in which case, most live on in the form of rags), they are given to people who might want them or donated to charity. Waste not want not! But yes, I do spend money on clothes, shoes, and accessories that I don’t need, strictly speaking. My father would argue that these dollars could be better spent on other things or given away to help various causes. But could not the same be said for money spent on anything beyond one’s most basic needs?

I would be remiss if I didn’t also touch upon my father’s particular criticism of fashion that is physically harmful–his most often used example being spiked high heels, which he compares to the Chinese custom of foot binding. I think that analogy is a bit of a stretch, if for no other reason that young girls whose feet were bound had little or no choice of whether or not to participate. Foot binding typically began before the arch of the foot had fully developed, typically between the ages of two and five years. I don’t know many girls of that age who are walking around in spiked heels. Yes, high heels can contribute to back, ankle, and knee problems, and I would not advise living in them. I feel that to compare high heel – related injuries to the grotesque and mostly irreversible damage caused by foot binding makes light of the pain inflicted on approximately 2 billion Asian women over many centuries.

With that, I will close and hope that I have made my point. Not everyone is going to find putting a new outfit together to be great fun, just like not everyone will derive great pleasure from listening to jazz or seeing a Shakespeare play. To imply that one should not have that option, well, that makes me sad.

By the way, this blog has a series on the psychology of clothes, which I found interesting.

One Response to “Down With Fashion Fascism!”