When I was in sixth grade, my class, in combination with the fifth graders, put on Dickens’ A Christmas Carol (well, a highly abridged version thereof) as our contribution to the yearly Christmas pageant. Competition for parts was fierce, and let’s face it, the only big part in A Highly Abbreviated Christmas Carol is that of Ebenezer Scrooge, and well, that part was going to a boy. So, my best shot at a part with any meat to it was to go for one of the ghosts. I auditioned my little heart out, and I was pretty pleased to be cast as the ghost of Christmas yet to come…briefly anyway. 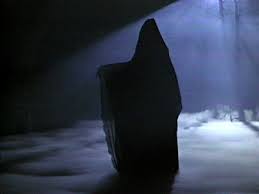 I eagerly paged through my script so I could find my part and start to memorize my lines. But there were no lines. Surely I must have some pages missing from my script! Nope, the numbers were all there. Where were my lines? This didn’t make any sense. I hadn’t realized that one of the things that makes the third ghost so eerie is the lack of vocalization, and even if I had, I don’t think I would have cared. I know they say that there are no small parts, only small actors, but screw that. This small actor wanted lines!

His attempts to reassure me were in vain. “But, I thought I was going to have a speaking part!”

“It’s an important part. It the one that really shows Scrooge what will happen if he doesn’t change.”

“Couldn’t we add some lines?

Mr. L looked skeptical, but he already seemed tired of arguing with me. “Like what?”

“Like, I could tell Scrooge that this will be his future unless he changes and becomes a better person.”

Mr. L sighed. “Okay. Write down your ideas, and we’ll add a few lines for you.”

Yup. That was me as a kid, precocious enough to rewrite Dickens.

One Response to “Who Says Dickens Can’t Be Improved Upon?”