Fun with mirrors at the Escher museum

On Day 8, it was time for trip out of the city, so we took a 45-minute train ride to Den Haag, a town southwest of Amsterdam. When we arrived, our plan was to go to the M. C. Escher museum first. We found the correct street, and as we wandered about looking for the museum, C noticed a nearby man locking up his bike. C is not shy about asking for directions and will talk to just about anyone at any time. The man, whose name was Jan (which, unfortunately, reminds me of Breaking the Waves, one of the worst movies I have had the displeasure of viewing), not only gave us directions to the museum, he walked us to it, flirted with C,  gave us recommendations for lunch and other things to do in Den Hagg, and posed for pictures.

The Escher Museum was delightful. I have long been a fan of his work, and it was interesting to see the evolution of his style. Not only that, but the museum is in an old palace, which is interesting in and of itself. Just about every room had a Czech crystal chandelier in some fanciful shape. The top floor of the museum had a variety of interactive exhibits, as well as a short movie shown on a curved screen that actually made you feel like you were on a ride, traveling though Escher’s works of art. All in all, I’d say it was my favorite destination of the whole trip. 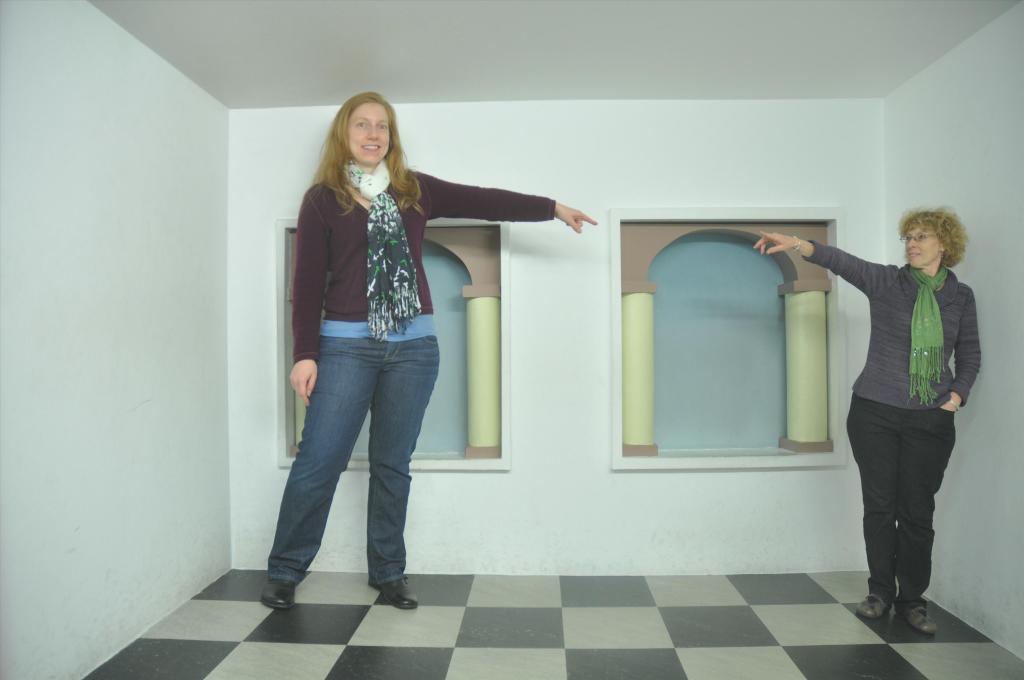 It's so rare that I get to feel tall!

We spent so much time at the Escher museum that we had little time for much else. We had some beer and lunch at Juliana’s Cafe beneath a larger-than-life picture of Queen Juliana apparently declaring “Touchdown!” Then, we went to the Mauritshuis, a museum that houses a collection of pieces from the Dutch “Golden Age,” including the well-known Girl With a Pearl Earring and the lesser-known Hunting for Lice. For the most part, it wasn’t my favorite kind of art, but it was worth a short walk-through.

We walked back to the train station and took in the scenery of Den Haag. I admit, I didn’t see much of the town, but what I did see was very pretty. On the train ride back, before dozing off, I saw a real Dutch windmill, which is good because I’m not sure that any trip to Holland is complete without seeing at least one.

Upon arriving back in Amsterdam, we hopped a free ferry–not because we had a particular destination in mind but simply because we wanted to take a ride and enjoy the beautiful sunset. After that, C was tired and headed home while my mom and I wandered the city a bit more. One of our objectives was to visit a particular souvenir shop she had been to the previous week. We had also walked past it earlier the same week, and she’d pointed out something in the window that she was considering going back to purchase. We went to where she thought the shop was located, but could not find it. In my memory, the shop had been closer to Central Station, so we walked to where it was in my recollection–no shop. We again walked the street where my mom was sure it was located–no shop. “It disappeared!” my mom exclaimed. I assured her that it did not disappear, we just must be remembering wrong. No worries, as there was not a lack of other souvenir shops in the vicinity. We roamed, bought some gifts, enjoyed some of the already-appearing Christmas decorations, and learned from one shop owner that there are approximately 750,000 people in Amsterdam and more than 1 million bicycles. Apparently, it is not uncommon to forget where you parked your bike and buy a new one rather than try to find it. A number of times, in crowded parking lots, I have approached blue Corollas that did not, in fact, belong to me, so I can imagine that identifying one’s bike in the sea of velocipedes that is Amsterdam could prove difficult. But think of the fun one could have in decorating a bike to make it as distinctive and identifiable as possible!

Ship and a pretty sky

Before going home and retiring for the evening, we stopped at Cafe Gollem, a cozy little place with an extensive beer selection. 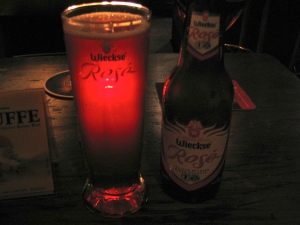 A fine end to a fine day!